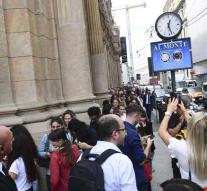 milan - Italy is the land of cappuccinos and espressos, but the Italians are now also faced with frappuccinos. The American chain Starbucks has opened its first tent in the country on Friday. There was a long line with hundreds of tourists and Italians in front of the Milan office. 'I hope the coffee tastes better here than in America,' said a Milanese customer.

Before the end of the year, Starbucks wants to open another three locations in Milan. For Italian purists, that is cursing in the church. Starbucks received a lot of criticism recently, but market researchers think that young Italians are open to other tastes.

Starbucks has 29,000 coffee shops worldwide, but the coffee country par excellence, Italy, was still missing. The conquest of Italy is the life dream of the man who made Starbucks great, ex-chairman of the board Howard Schultz. He visited the country in 1983, when his employer Starbucks was still a small shop for coffee beans in Seattle. In Milan Schultz saw how people could buy coffee on every street corner and that customers stayed there to talk to each other.

Schultz decided to leave Starbucks and set up such a bar himself. He called Il Giornale, after the local newspaper in Milan. It was a success and two years later he could buy over Starbucks for a few million dollars. In the meantime, Schultz's assets are estimated at several billion.