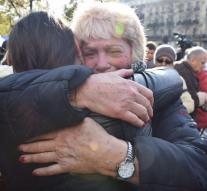 - The contrast with yesterday could not be greater. Sunday was sung and cheered on the Place de la République : today the atmosphere was subdued, depressed and sad.

The minute-long silence (there was no organization present who kept the time) was accompanied by honking cars around the square : Paris lives by. When the memorial was crying, cuddled, comforted, and a ribbon was formed by grieving Parisians : hand in hand struck hundreds of people watched the silence.

After the minutes at multiple locations on the square used French national anthem. But as powerful as it sounded yesterday, so sad the Marseillaise now came from hundreds of throats on the square. Women with the French flag tied around their necks stood weeping to see how a man with red- white-blue flag as a sash put a picture on the big statue in the square : his sister, who was killed in the attack on a restaurant.

After the minute the square was soon empty. Back in the subway, back home or work. Paris grieving, but also on living.