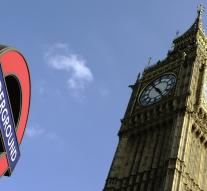 london - The plans to be in London this autumn at night to run his suspended the subway . Wednesday failed consultations between the transport company and unions on working conditions around the night shifts.

It has become a lingering dispute and the original date that the night would go underground ride ( September 12 ) is already over a month ago.

Trade unions accuse the management of London Underground not to take any proposal seriously. British media reported Wednesday that there is certainly no underground runs until New Year in the night hours by the labor dispute.