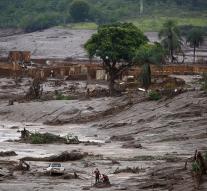 - The probability that there are still survivors found after a dam breach in the south of Brazil is getting smaller and smaller. That the governor of the state of Minas Gerais said. He fears that the hopes for the thirteen miners and thirteen others is gone.

The breakthrough dam at an iron ore mine Thursday caused huge mudslides. Therefore been included houses destroyed in the village Bento Rodrigues, some 250 kilometers from Rio de Janeiro. At least two people were killed. Among the missing are five children. Approximately five to six hundred people sitting in an emergency shelter.