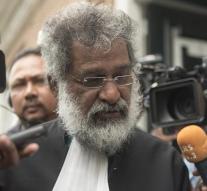 paramaribo - If it lies with the lawyer of Desi Bouterse, the prosecutor receives a disciplinary sentence in the December murder trial because he did not stop the process by June 2016. President Bouterse gave him the order because state security would be at risk.

'If you received an order and you did not perform it, you will earn a disciplinary sentence. This is how it works in the civil service, 'said advocate Irwin Kanhai Thursday evening in a special broadcast of the Surinamese government information program. In 2016, President Bouterse instructed the Public Prosecution Service (OM) to stop the process. He used an article from the Surinam Constitution for which the President gives this power if state security is at risk.

The program was broadcast under the title Reverse. The makers want to tell the people of Surinam the other side of the story of the events in December 1982. Then fifteen opponents of the then military regime were killed. According to the government, the story of the victims of the victims has dominated public opinion over the past 35 years. The OM claimed against Bouterse as chief verdict last twenty years ago. He was then the leader of that military authority.

From Kanhai's words it became clear that in his defense he would emphasize the plans of the later victims to commit a coup to overthrow the military authority. Many deaths could have fallen. Kanhai: 'Therefore, the legitimate authority of Bouterse then intervened. '' He will also emphasize that the prosecution process has become a 'political' process aimed primarily at sending Bouterse's government away.

It is not known when Kanhai will keep his plea. He is assuming that the case can take a very long time, possibly 25 years. That's because after the judge will make a decision, both Bouterse and the OM can appeal. According to him, witnesses must be recalled again.

The next session of the trial is 30 October. Then the prosecutor will continue his penalty against the other suspects.