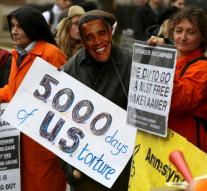 london - The last Briton who was stuck in the US prison for suspected terrorists, Guantanamo Bay, was released Friday. Shaker Aamer was thirteen years in the camp without trial. The Sky news reported on the authority of anonymous sources.

Aamer was arrested in Afghanistan in 2001 and was accused of having ties to al- Qaeda. The man born in Saudi Arabia is expected to return back to London, where his wife and four children live.

Both politicians and well-known British have lobbied for the release of Aamer, including Pink Floyd singer Roger Waters.