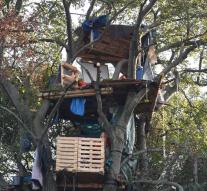 berlin - The German police have, in their own words, dismantled all tree huts of activists in the so-called forest near Hambach. Energy company RWE is now making further preparations for the controversial mining of lignite in the forest.

The police began early last month with the eviction of the forest, where activists had entrenched themselves. They had set up dozens of tree houses. A police force had to come to the rescue to remove the conservationists from the 12,000-year-old forest, which lies between Aachen and Cologne.

RWE is the owner of the more than 100 hectares of forest where lignite will be extracted. A spokesperson for the company said that activists will not be allowed to occupy the area again. Opponents of the plans are expected to be heard again in the coming period.