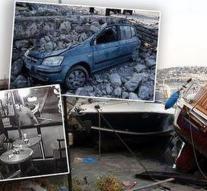 kos - After two disaster years, a third tourist season may not fall on the Greek island of Kos in the water. Full of passion, Johanna van Itterzon of Aalsmeer and her husband Lucas Lavranos fight against that doomscenario, just as it is quite quiet after the earthquake is pretty quiet on Kos Town's beaches.

Unlike many competing beach cafes, their beach tents, Filarakia, are quite busy with a group of regular customers, most Dutch young people who are less likely to lie to the last week's earthquake and the aftermath of Saturday. The beer pump runs continuously at 38 degrees Celsius every Monday, in addition, the cork of the bottles rosé pours.

SEE ALSO: All about the earthquake at Kos and Bodrum

'The damage in the Netherlands is wrongly exaggerated,' says Johanna, who started the beach club annex restaurant with Lucas 22 years ago. The pair are worried that this tourist season will fail again without their fault.

By 2015, it was the images of refugees on Kos that led to a dip in the bookings. In 2016, the tourist stream suffered from the aftermath of that matter. This year, the Hotel Association Kos expected a growth of 20 percent, but that was before the earthquake struck and some historic buildings were severely damaged and demanded two lives.

The 200,000 vacationers on the island have made the events come calm, Konstantina Svinou says on behalf of the hoteliers. But on the beaches is another reality.

Filarakia is a white raven compared to other beach tents, where most of the sun loungers are unattended. For example, the La Sola beach club makes humble attempts to move the scary bypassers to the beach. 'Terrible,' says Remzi Karadjaoglan, operator. 'I rented this place for nine years and if this continues, the first three seasons have failed. '

Lucas Lavranos, on the other hand, looks less gloomy. He expects a clear recovery when people are over the first horror. 'Just come! Everything is cleaned and everything works well, 'he says enthusiastically.

He is not afraid of aftershocking. They are required to absorb the energy of the earthquake. 'This island is built on earthquakes,' says Lavranos. 'People here are used to it. You really need to look for buildings that are damaged. The vast majority remains untouched and no one has to fear anything. 'His wife Johanna nods in agreement. 'It's safe here. Absolutely. '