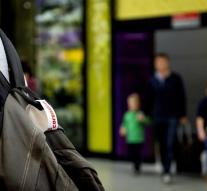 amstelveen - Passengers with KLM from Cairo to Amsterdam fly may be restored simply take hold luggage. That left the airline Monday. KLM "with its own staff and resources " screening of cases taken up in the Egyptian capital.

In recent days KLM only took hand luggage. This was prompted by the crash of a Russian airliner in the Sinai. The device, which with 224 people on board was on its way from the Egyptian resort of Sharm al- Sheikh to St. Petersburg, presumably crashed by a bomb on board.

Two KLM flights in recent days without baggage came back from Cairo. But with no suitcases retarded, said a spokeswoman for KLM. Passengers who wanted to necessarily their luggage, were rerouted to other companies who refused no suitcases.