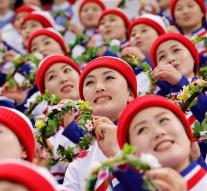 - 'Made in North Korea' does not seem to be a direct cause to run to the store, but the Committee for the Promotion of International Trade of the Socialist Resistance naturally thinks otherwise. The communist country seems to export everything.

Persbureau AP put its hand on the brochure Handelswaar 2018, in which the Stalinist dictatorship proudly brags about its own goods capitalistically.

North Korea praises energy drinks from their own soil that make you taller, 'hydrogen water' so you never get tired again or an elixir with the frightening name Royal Fresh Blood that prevents thrombosis, are shamelessly applauded.

It all sounds exotic and exciting, but in reality North Korea mainly exports boring products such as coal, concrete and clothing. The latter then not in the version of the Mao-like suits that dictator Kim Jong-un usually wears, but simple T-shirts.

But if you can build a nuclear rocket then you have something more to offer. The brochure is therefore full of electronic products. Not that Phillips or Samsung will be awake. The TV's, for example, look pretty strong. The karaoke machines look better. No wonder, karaoke is popular throughout Asia and has also reached the generally closed republic.

The list is also interesting for women with colorful lipsticks, lingerie and facial creams. That probably explains the radiant faces of the North Korean cheerleaders sent for promotion to the Winter Olympics or the beautiful female elite soldiers Kim is surrounded by.