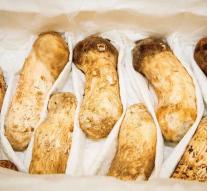 The striking gift has now arrived at an air base near Seoul, the spokesman for Moon said. It would be about two tons of mushrooms.

The president has ordered the expensive delicacies to distribute. They go to South Koreans who live separately from relatives in neighboring North Korea and fall outside the boat at a reunion. 'I hope the smell of the mushrooms, which still smell like North Korea, can offer some comfort,' Moon said.