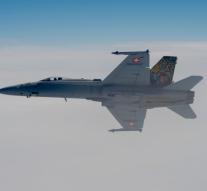 zurich - An air traffic controller, the Swiss fighter pilot who crashed early last week given too low a price. This was announced by the Ministry of Defense Tuesday. An initial investigation showed that the 27-year-old fighter pilot before his F-18 radar disappeared a height of 10,000 feet (3050 meters) had received of the tower. In the sector applies at least 14,300 feet safe.

The plane flew at about 3,300 meters altitude in poor visibility against a cloud-shrouded mountain. Why the air traffic controller gave the wrong information and what the exact impact on the course of the flight is still unclear.

It was the third accident involving an F-18 from the Swiss Air Force in three years. Friesland collapsed in June, a Swiss F-5, members of the stunt team was preparing for an air show down after a collision with another aircraft. The pilot saved himself with his ejection seat.