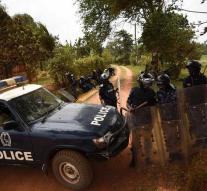 kampala - Fighting between security forces and separatist fighters this weekend in western Uganda have fallen 55 deaths. A police spokesman in the region said that fourteen officers and 41 members of a militia in the city of Kasese Saturday were killed. Kasese is located about 250 kilometers west of the capital Kampala.

The police officer knows the outbreak of violence in and around Kasese to a militia and the guard of King Charles Wesley Mumbere of Rwenzururu. The rwenzururu region covers an area that early sixties proclaimed during a guerrilla struggle for independent kingdom. In the eighties, was the region autonomy. In 2009 recognized the strong man of Uganda, President Yoweri Museveni, as Rwenzururu kingdom within the republic of Uganda.

The Republic now has several kingdoms within its borders. Ethnic tensions between the capital and autonomous parts of the country have persisted.