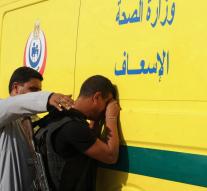 - Gunmen have slain Saturday four security guards in an attack on a checkpoint in Saqqara, near a number of Egyptian pyramids. According to a security source reason the two assailants on a motorcycle when she with machine guns opened fire on the police station.

A militant group linked to Islamic state in Egypt has claimed responsibility for the attack. Egypt has long been in conflict with Islamist insurgents who coined mainly to security personnel. Hundreds of police and soldiers have been slain since the army threw the regime of President Mohamed Mursi of the Muslim Brotherhood in 2013 down after mass protests against his rule.