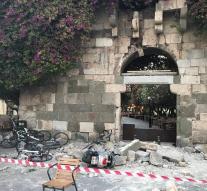 kos - An earthquake between the Turkish coast and the Greek island of Kos drove two deaths on Thursday night. Also, 120 people were injured, reports Mayor Giorgos Kyritsis of Kos. The two dead fell in a bar in the town of Kos where the roof collapsed. There was a lot of entertainment in the city.

Whether there were Dutch victims, the Ministry of Foreign Affairs could not say Friday morning. The ministry says in contact with the local authorities to investigate that.

The earthquake, with a force of 6.7, caused floods in the Turkish resort of Bodrum. Due to the small tide of waves as a result of the quake, buildings and streets were underwater.

After the quake many people went up the street. There are also reports of damage to buildings and the power went out in several places. The European-Mediterranean Seismological Center (EMSC) warns people through social media to temporarily avoid lower-lying areas.

The epicenter was located in the sea about ten kilometers southeast of Bodrum. Kos and Bodrum are popular holiday destinations.

Are you on the Turkish coast or on Kos? And did you notice something of the earthquake? Let us know. Send photo / video to editors-i @ telegraaf. Com or to our whatsapp line 0613650952.