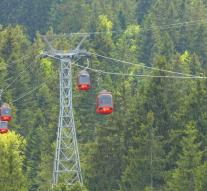 zurich - Two aircraft crashed in Switzerland on Saturday. As a result, at least four people were killed.

On Saturday morning a small private plane crashed south of Lucerne, near the Rängg mountain pass. None of the occupants, a family with two small children, survived the accident. A fire broke out at the site of the crash. The fierce fire had first to be extinguished from the air by helicopters, before emergency personnel could go on the spot.

At the beginning of the evening a historic plane crashed on the western flank of the Piz Segnas mountain, not far from the border with Liechtenstein. According to local media, there are no survivors. How many people were on board is not known. The wreck is 2540 meters high. After the crash, a major rescue operation started, with five helicopters being deployed. A flight ban has been imposed above the area and will last until Sunday evening.

The device is a Junkers Ju-52, reports the owner, the Swiss aviation company Ju-Air on his website. The Ju-53 is a three-engine aircraft built in Germany that first flew in 1932 and can accommodate around 20 people.

Nothing is known yet about the causes of the accidents.