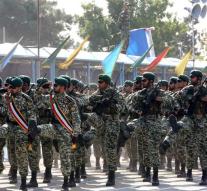 teheran - Gunmen opened fire during a military parade in the Iranian city of Ahvaz. There were several deaths, reports Iranian media.

Press agency Tasnim reported that the attackers shot at participants in the ceremony. There is still uncertainty about the total number of victims.

Parades are held on Saturday in several Iranian cities. This pays attention to the beginning of the Iraqi-Iranian War in 1980. That bloody conflict lasted eight years.