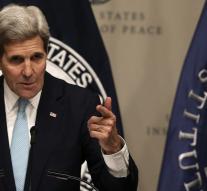 - US Secretary of State John Kerry hopes that the participants in the consultations on the war in Syria will not put the heels in order to defend their own interests. He said Thursday in Washington that to start with the United States should overcome their disagreements with Russia and Iran on the tenure of Syrian President Bashar al- Assad.

The consultations will be held Saturday and Sunday in the Austrian capital Vienna. As well as during the first round of talks, also in Vienna on October 30, Iran will be present as an interlocutor. No concrete decisions were taken. But important topics were, and are now a cease-fire, elections and the formation of a transitional government. To our knowledge, the Syrian government and the rebel groups in the country again, not of the party.

Kerry said he sees no major breakthroughs through consultations in the offing. The second Vienna meeting is mostly a matter of putting back a small step forward, he said.

The civil war in Syria has lasted four years and cost approximately a quarter of a million lives. The struggle and the involvement of Islamic State led to a flow of refugees to Europe. The European Union is also finding the Member States, France, Britain and Germany at the conference table. There are also representatives of Egypt, Turkey, Iraq, Saudi Arabia and the United Arab Emirates.