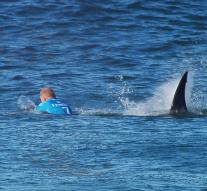 The American fast food chain has now edited the film for a TV advertising in South Africa, in which Fanning keeps standing after the attack on his surfboard shark triumphantly above his head.

Everyone is furious. Fannings mother called advertising disrespect. Her son came from without injury, but " other families have to mourn the dead ". The world surf federation immediately announced that it would go to court, according to the Süddeutsche Zeitung Monday.