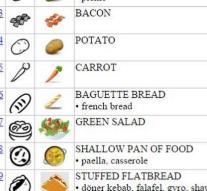 - A kebab, a gun, someone shrugging his shoulders potentially smartphone users in 2016 as they all send emoji. They are, along with 64 others, on the list of candidates to be voted emoji 's next year.

What emotions are added, is the Unicode Consortium. This is an organization in which some big companies such as Apple, Google and Facebook  take some governments session. They include determining which emoticons are added to each new version. Besides the above candidates are also medals (bronze , silver and gold), a baguette, a wilted flower and a symbol for making a selfie considered.

The complete list is on the site of the Unicode Consortium to view . In June a final decision is taken , and telephone and software makers still need to build support for the new emoji's. It will still take until late 2016 before we can invite friends for a doner sandwich without having to use words.