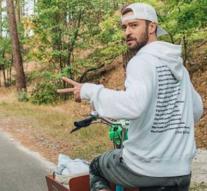 schoorl - Coincidentally such a sense to cycle through the dunes? World star Justin Timberlake cycled Friday on a cargo bike through the dunes at Schoorl! He placed a photo of his cycling adventure on his Instagram account with more than 50 million followers.

Justin arrived with a large company at Raat bike rental, where he and his team hired a number of bicycles to spend a day in the fresh dune air. This is how Noordhollands Dagblad reports.

The group stayed away for about 3 hours and returned the bikes neatly.

Justin will play in the Gelredome in Arnhem in the coming days and in the Ziggo Dome in Amsterdam.