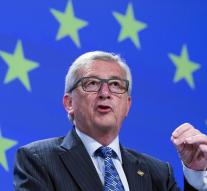 belek - The bombers that Friday death and destruction in Paris were criminals and not asylum seekers. The Member States of the European Union must not give in to primary reactions to reject refugees. That said Chairman Jean-Claude Juncker of the European Commission Sunday.

" We have different groups of people who come to Europe not lump together ", Juncker said on the sidelines of the G20 meeting in the Turkish resort of Belek.

Certainly one of the bombers would have entered Syria from the EU via Greece. " He is a criminal, not a refugee or asylum seeker ", said the Commission President.

" Those in Europe who try to change the migration agenda, I would remind you here seriously to deal with and not to give in to the primary responses I do not like to see ", said Juncker.