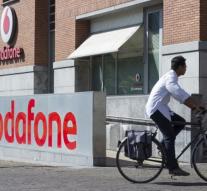 - Vodafone Netherlands in the first half of its 2015/2016 financial year, broken something made ​​more sales than a year earlier. The figures from the telecommunications company revealed Tuesday that a surge in mobile data use one of the driving forces behind the growth in sales.

The local branch of Vodafone Group posted an operating revenue of 883.7 million euros, an increase of 1.1 percent compared to the first half of 2014/2015.

The mobile data usage increased by 74 percent due to a national coverage of the 4G network and related services and an increasing popularity of services like 'TV Anywhere' and ' Napster '. Vodafone is working with the continued rollout of 4G + and services such as streaming video. More than 1.4 million customers of the company have a device that is compatible with the latest network release.

Even in so-called fixed services there was growth. Due to an increasing demand for 'Vodafone Home' (internet, telephony and TV), where the customer base swelled 138 percent to 73. 000, sales increased here by 32 percent.

The total number of customers fell slightly, to 5.1 million, but was offset by higher revenue per customer.

Parent company Vodafone Group achieved a turnover of 20.3 billion pounds (about 28.5 billion euro), 2.3 percent fewer than a year earlier. The decrease is mainly due to continued competition in Europe.