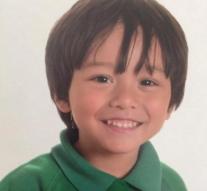 barcelona - The 7-year-old British-Australian boy Julian Cadman probably did not survive the terrorist attack in Barcelona on Thursday.

This has confirmed the Spanish agency for missing persons in a tweet. There was a wait for Sunday morning with the identification of Julian until his father was in Barcelona. He is the fifteenth deadly victim.

Over the past few days, there was a lot of confusion about what exactly happened to the 7 year old boy. The missed messages went all over the world.