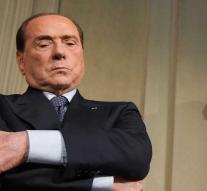 milan - Former Prime Minister Silvio Berlusconi may, according to the Italian media, hope for an early return to politics. 'Berlusconi has been rehabilitated', headlined the newspaper Corriere della Sera on Saturday, relying on a court decision in Milan. On this basis, the 81-year-old veteran can again stand for election and hold a political office.

In 2013, the Senate deprived Berlusconi of the right to act as a member of parliament after a conviction for tax fraud. Because that prohibition was not to end until 2019, Berlusconi could not take part in the parliamentary elections as a figurehead of his Forza Italia party in March.

'Finally justice, after a five-year ordeal', Mariastella Gelmini, Forza's party chairman in the House of Representatives, responded to the judge's decision.