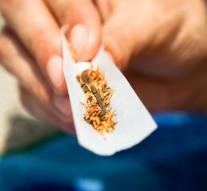 rome - The Italian police has more than 20 tons of hashish were seized. The drugs were hidden in the hull of a freighter and have an estimated street value of 200 million euros , police said Friday .

Following a tip, the police went on board the ship and escorted it to the port of Cagliari in Sardinia. Only after eighteen days of searching , police found the drugs. While searching his cranes used to load a massive granite blocks that move the ship was carrying.

Eventually, the police found 821 packages of hashish with a total weight of 20.5 tons in a ballast tank in the bow of the freighter. The ship's captain and nine crew members, all Syrians, were arrested.

The last port of call of the ship was Vigo in Spain. Italian police worked on the operation with the Spanish police and Europol, as well as with the French and Portuguese authorities.