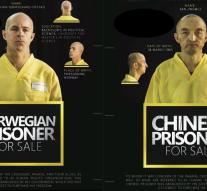 raqqa - Islamic State has executed two hostages. This was reported by Associated Press. It is the Norwegian Ole Johan Grim Gaard- Ofstad and Chinese Fan Jinghui. The pair has since early this year held hostage by IS.

In September Grim Gaard and Jinghui sale in Dabiq, the 'glossy' of Islamic State. The Norwegian government said at the time in response to want to pay a ransom.