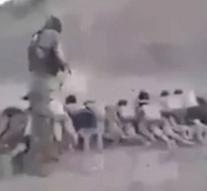 raqqa - Shocking new images that could be seen circulating on the Internet are the IS- 200 terrorists kids executed.

The video, which will be put online by a Yemeni anti-IS- activist, shows how the children are forced to lie on their stomachs in a row. The killers then opened fire with automatic weapons.

The authenticity of the video is not yet certain, but it would not be the first time that IS his atrocities and films over the internet spreads as propaganda.