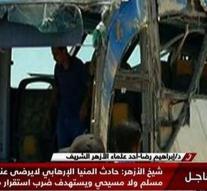 cairo - Islamic State (IS) has claimed Friday's attack on two buses with Coptic Christians in Egypt. That made the terrorist group in a statement in a statement.

At the time of the attack in the Egyptian province of Al-Minya, there were certainly 29 deaths. The Christians were on their way to the Saint Samuel Monastery in the desert northwest of the city of Al Minya. They were shot from three terrain cars.

In the al-Minya region, about 220 kilometers south of Cairo, there is a relatively large Christian minority. There are more frequent clashes between the Islamic and the Coptic people.

Christians in Egypt are the target of Muslim extremists. Early April, two attacks on churches in the north of the country caused more than 45 deaths. IS also claimed responsibility for it. IS threatened early this month with more attacks on Christians and Westerners.

The Egyptian Air Force conducted resignation actions in Libya on Friday evening. According to the military authorities, it involved six attacks on camps where militants are trained.