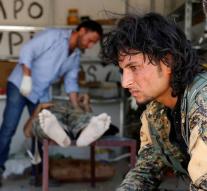 raqqa - The enclosure of the official capital of Islamic State, Raqqa, has been completed. That reports the Syrian Observatory for Human Rights, which announced Thursday that the last escape route from the Syrian city has been cut off.

The US-backed militants of the Syrian Democratic Armed Forces (SDF) launched this month's Raqqa siege. The United Nations broke alarm this week about the high number of civilians in the battle around the city. Since early June, 173 citizens would have died.

Islamic State had another contradiction on Thursday. The Iraqi army said the destroyed historical mosque in former Islamic building had occupied Mosul where the terrorist organization called out the caliphate three years ago. Prime Minister Haider Al-Abadi said that the end of the terrorist state was near.

'We see the end of Daesh's fake state,' twittered the Prime Minister, who used the Arabic abbreviation of IS. 'The liberation of Mosul proves that. ''