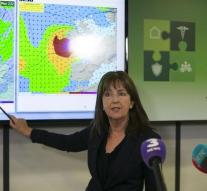 dublin - Ireland gets rid of the hurricane Ophelia, possibly the heaviest storm since more than fifty years that hit the country. In many parts of the country, schools remain closed on Monday, reports the Irish Times. The highlight of the storm is expected between Monday 9:00 AM (10:00 AM Dutch time) and Tuesday 3:00 AM.

According to the Irish meteorological service, the storm draws along the west coast towards Scotland. Wind speeds of up to 130 kilometers per hour are expected. In some coastal areas, the army with sandbags is ready for floods. Power cuts also take into account. Airline KLM has six flights from Schiphol to Ireland and removed again for Monday.

Once over the UK, the storm will be diminished, but the UK authorities warn that road, rail and air traffic and ferry services may be hindered.