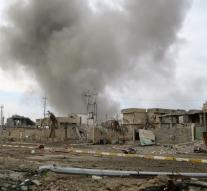 baghdad - Iraq is preparing for the decisive attack on the IS-stronghold Ramadi. The state television reported Friday that government troops have now penetrated deep into the city.

The offensive against the militants in the provincial capital, located about 100 kilometers west of Baghdad, began Tuesday. Islamic State, which controls a third of the country, conquered the city last spring. The Iraqi government has always said that after the reconquest of Ramadi, the battle will shift to Mosul, in the north of the country. Mosul is the largest city of IS is held.

The US Air Force supports the advance of the army continues with extensive air strikes on positions of the extremists. Washington announced Friday that Thursday a total of nineteen attacks on IS carried out in Iraq. Three of them were against positions in Ramadi.