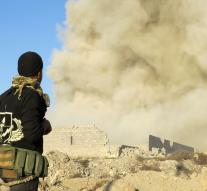 baghdad - Iraqi forces have taken Sunday the government complex in downtown Ramadi. Thus, the terror group Islamic State of Iraq is defeated in this city, reported a spokesman for the Iraqi armed forces.

The complex was considered the last stronghold of ISIS in the provincial capital, located about 100 kilometers west of Baghdad. The offensive against the extremists began Tuesday. Islamic State swept the city last spring.

We are in full control of complex , said the army spokesman. According to him, there is nothing left that indicates the presence of the opponent.

Retaking Ramadi was a major victory for the Iraqi armed forces since Islamic State got hold of a third of the country in 2014.

The Iraqi government has always said that after the reconquest of Ramadi, the battle will shift to Mosul, in the north of the country. Mosul is the largest city of ISIS is held.

The US Air Force supports the advance of the army with extensive air strikes on positions of the extremists.