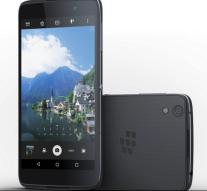 waterloo - BlackBerry on Tuesday briefly shown a few pictures of a new smartphone on its website. The images were quickly removed, fan community CrackBerry reports. Also, the device's specifications were recently published online. It is not known whether the information was published accidentally or deliberately.

The device is called the Neon and runs on Android Marshmallow. He has no physical keyboard, but a touchscreen. BlackBerry held hose to the old keyboards, but lost a lot of market share. The screen is 5.2 inches in size.

The smartphone will get a Snapdragon 617 system-on-a-chip, has 3GB RAM and 16GB up to 2TB of additional storage. The cameras have 8-megapixel resolution and 13 megapixel front to the back.


BlackBerry is in dire straits. Sales of appliances disappointing. Buyers are no longer interested in keyboards. The Canadian company still earns money on software licenses and services.