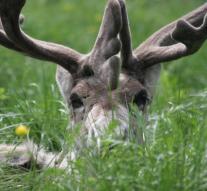 oslo - A hunter in Norway mistakenly shot dead two reindeer that ran in a zoo in northern Norway. The hunter realized shortly after the incident that he had seen the fence around the zoo overlooked.

The children stood in the Polar Park, south of the city of Troms and north of the Arctic Circle. The hunter was according to several media in a group en route when one of the dogs caught the scent of the reindeer and under the fence at the zoo ran.