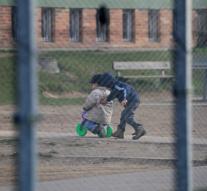 prague - More than sixty refugees at a reception center in the Czech Republic have gone on hunger strike. They do not agree that they will be held until ninety days before being allowed to travel to other countries in Europe. That volunteers who visited the shelter said Tuesday.

Drahenice The center is located about 90 kilometers west of Prague and has recently opened. Stay 144 people. According volunteer Petra Damm refugees on hunger strike Tuesday after forty people have been taken away from the camp. The refugees fear being deported.

Most refugees have not applied for asylum in the Czech Republic. They want to travel to Germany.