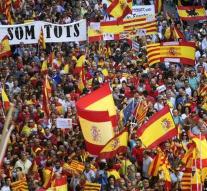 barcelona - The streets in the center of Barcelona are estimated between 350,000 and 400,000 people to express their support to the national unity and also to argue against the separation of Catalonia from Spain.

The present waving with Spanish and Catalan flags and scanned 'live Spain, live Catalonia. 'The great masses of protesters thus objectively oppose the desire of the Catalan state government to separate themselves from Spain.