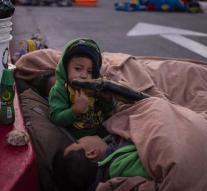 tijuana - Due to the influx of migrants who want to travel to the United States, a humanitarian crisis has arisen in the Mexican border town of Tijuana. That says Juan Manuel Gastélum, the mayor of Tijuana. He asks the United Nations for assistance in supplying food and other relief goods to migrants.

To the newspaper El Sol de Tijuana, Gastélum said that the city itself has no money to help the immigrants. He said that there are now 4700 refugees from Central America settled in Tijuana and that giving help to those people costs about 24,000 euros per day.

Most Central Americans who want to move to the US try to travel north via Tijuana. Tijuana is located about 30 kilometers south of the American city of San Diego.