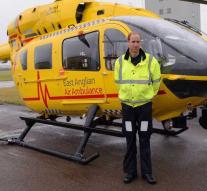 - A mother who lost her son by drowning thanked Prince William. The British prince was involved in the rescue operation as a pilot of the ambulance helicopter.

Sixteen year old Robbie drowned last year when he went swimming with friends. In The Mirror, his mother Sarah Lea tells me that after his death she found solace in an unexpected corner. A day after the rescue, the 33-year-old British learned of the royal involvement when a friend told her: 'A prince was trying to save your prince. '