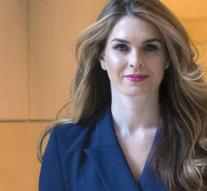 - Hollywood is staring for Hope Hicks (29), White House Director of Communications and President Donald Trump, as she has quit her job. According to The Blast Hicks can get started at various PR companies in Hollywood, to focus on 'celebrity crisis management'.

According to the companies with which The Blast has spoken, her resume has only improved since she worked for a while in the White House. 'If you survive that jungle, you are a tough one and you can do a lot,' reports the online medium. According to a Hollywood insider, Hope would be an asset to any business due to its experience with large public PR issues at world level. 'She also deals well with the media, which is essential in her profession. '

Celebrity-PR is not entirely unknown to Hope. Before she went to the White House, she worked at Hiltzik Strategies, where she also had such items in her portfolio. It is not yet known whether the former model already has a lucrative offer.