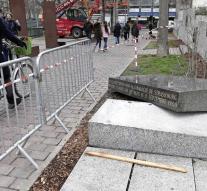 strasbourg - A stone that recalls the old synagogue of the French city of Strasbourg has been destroyed. Agents discovered Saturday morning that the stone was overturned, French media reports.

On the hundred kilos weighing stone is a text about the destruction of the old synagogue by the German occupiers in 1940. 'It seems to be a new anti-Semitic act, this time in the heart of Strasbourg', said the mayor of the Alsatian city. He expressed his worries about the apparent act of Jew-hatred, less than two weeks after a number of eighty Jewish graves elsewhere in the area were daubed.