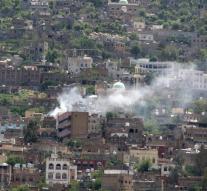 sanaa - Houthi rebels have bombed the home of the musician who composed the anthem of Yemen. The act is seen as a symbolic attack on the unity of the country, according to the Arabic news channel al- Arabiya.

Ayoob Tarish and his family were unharmed by the attack on his house in al- Aboos , near the city of Taiz . Well founded the grenades damage to the property. Tarish made ​​the song United Republic national anthem was following the merger of North and South Yemen in 1990.