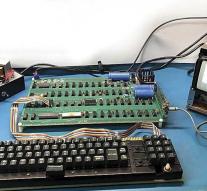 boston - One of the first computers that Apple has ever made is auctioned. The device still works, says auction house RR Auction, which hopes for an amount of 300,000 dollars, almost 260,000 euros. The buyer receives, among other things, the original motherboard, without modifications, and an authentic manual.

The founders of Apple, Steve Wozniak and Steve Jobs, had built about two hundred computers in 1976 and 1977. They did that in Jobs's parental home. The computer was named Apple I. Wozniak was responsible for the design and construction, Jobs arranged the sale and delivery. The computers were sold through a computer store in the neighborhood for $ 666.66. There are still about sixty copies, but most do not work anymore.

Wozniak and Jobs had met each other as teenagers. They came up with the name of their company after a visit to an apple orchard. Wozniak left Apple in 1985, but still receives compensation from the company every year and remained a shareholder. Jobs became billionaire, Wozniak not. His assets are estimated at about 100 million dollars. A third founder, Ronald Wayne, left the new company after a few weeks. He sold himself for $ 800 because he did not feel like risk. His stake, 10 percent from Apple, would now have been worth $ 100 billion.

Apple is now one of the largest companies in the world, with a market value of about one thousand billion dollars.