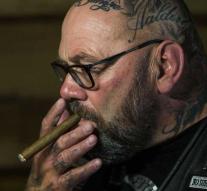 groningen - Former No Surrender leader Henk Kuipers (53) is outraged by his short-term transfer to a heavier security prison at the beginning of this month. He called it Monday in the court in Groningen ironically an 'interim vacation.' 'I am placed there for nothing. It was completely unnecessary, what a stunt. '

Kuipers was transferred to a heavier secured prison after an anonymous report that there were outbreak plans. He was hurriedly transferred from the prison in Leeuwarden to the BPG (management problematic Detainees) in Vught. Last Friday, so after two weeks, the extra measures were lifted and Kuipers returned to a normal regime.

Emmenaar Kuipers has been stuck on suspicion of extortion and leading a criminal organization since December. Lawyer Roy van der Wal asked for the detention of Kuipers to be lifted. According to Van der Wal, it has now been long enough. 'There is also still no concrete insight into a substantive treatment of the case. There is no recidivism risk, because Kuipers is no longer a member of No Surrender. The turning point is now reached ', according to the lawyer during the non-substantive session.

The judge decided later on Monday about the detention, as well as about the custody of co-defendant and Kuipers' former right-hand man Theo ten V.. He has been stuck since February. The lawsuit will not be dealt with substantively before the second quarter of next year, a date has not yet been taken.

At the beginning of July Kuipers set down his position as 'World Captain' and he is no longer a member of the motorcycle club. Ten V. has also terminated its membership.