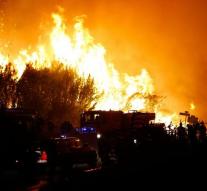 marseille - In the south of France and on the island of Corsica, fierce forest fires are raging. On Monday, 1400 hectares of forest were destroyed.

In the village of Mirabeau, hundreds of residents were evacuated. Dozens of horses in a stable have been taken to a safe place. The village of Bastidonne in the Vaucluse region was hit hardest, with 600 hectares of wood burning in flames. Also around the tourist town of Saint Tropez the fire seized around.

Part of the A51 motorway is closed, as is the railway line between Briançon and Marseille. Different forests are not accessible to visitors.

On the island of Corsica, the town of Carros was hit.

According to the authorities, the fires are not yet under control, but the outlook is positive due to the weather conditions.