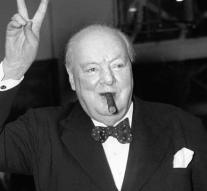 boston - A half-smoked cigar from former British Prime Minister Winston Churchill has spent more than 10,000 euros on an online auction in the US. The 10 centimeter cigar stump copper was a collector from Palm Beach (Florida).

Churchill (1874-1965) had the cigar in his flight to Paris in 1947 at Le Bourget airport between the lips and extinguished prematurely. A crew member of the plane with which he flew to Paris would have taken the cigar.

Particular detail is that the cigars still had the original banderole called Churchill. At the lot there was also a picture with Churchill and the conscious cigar at the airport.