Home / World / Half a million citizens fled from Mosul 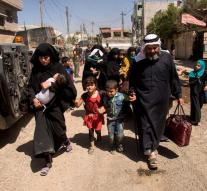 cairo - Half a million citizens have been able to flee the Iraqi city of Mosul since Iraqi forces have begun an offensive three months ago. That number reported the United Nations in a report on Thursday. One day earlier it became known that the army had completely surrounded the terrorist group of Islamic State in Mosul.

The UN Organization for the Coordination of Humanitarian Affairs (OCHA) spoke of 'alarming' figures. Another tens of thousands of residents of the city are about to leave Mosul, as the fighting between the army and IS is still going on.

A total of 700,000 citizens has fled the country since the revival of Mosul on IS.

The area still available to the terrorist group has been reduced to 12 square kilometers. This area includes the Old City of Mosul, where also the al-Nuri Mosque states where IS leader Abu Bakr al-Baghdadi called out a caliph in Iraq and Syria in 2014.