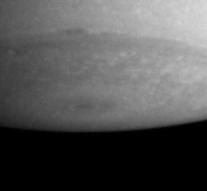 washington - It hails at the planet Saturn. Ice water comes from the sky, coming from the famous rings around the planet. It sometimes falls by about 10,000 kilos per second. The space probe Cassini has discovered that.

Cassini fared last year on Saturn, at the end of a year-long mission. At the end of his space journey, he traveled more than twenty times close to the planet and under the rings. With these dives, scientists wanted to discover what makes up the top of Saturn's atmosphere, and how it responds to material from those rings.

Scientists already had a suspicion of the striking rain showers, but they turned out to be bigger than they thought. 'The rain is a cloudbreak,' says one of the researchers. It is a mixture of water ice and organic material.

The Cassini was launched in 1997. After seven years of flying, he arrived at Saturn and at least 62 moons. He discovered there oceans on the Saturn moon Enceladus and seas of liquid methane on the moon Titan. Upon his downfall he flew into the atmosphere of Saturn. There he fell apart. In his last moments, the probe made all kinds of measurements, at a place where mankind had never been.

The downfall was carefully prepared. The flight control decided to let the probe go, because the fuel on board (plutonium) slowly ran out. The crash prevented the probe from ever swaying on one of the moons of Saturn. There may be traces of life there. The flight control does not want to pollute it radioactively.