Home / World / Governor Jakarta is free of blasphemy after punishment 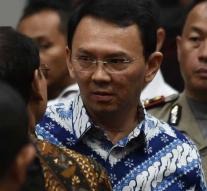 jakarta - The Christian former governor of Jakarta who was sentenced to two years in prison in 2017 for insulting Islam was released early. The trial against Basuki Tjahaja...

The 52-year-old Purnama, also known as Ahok, would have spoken disparagingly about the Qur'an during his campaign for a new term as governor of the Indonesian capital. A declaration was made and mass protests followed. Ahok, of Chinese descent, lost the election of his Islamic counter-candidate Anies Baswedan.

Purnama has always denied the allegations of blasphemy. The son of the former governor announced on Thursday that his father was released.