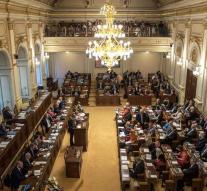 prague - The Czech parliament has early on Thursday morning agreed with the center-left minority government of Prime Minister Andrej Babis. The new government of Babis ANO party and the Social Democrats is controversial because it receives the tolerance of the Communists. This is the first time government influences since the communist dictatorship collapsed in the late Czechoslovakia at the end of 1989.

A debate preceded the vote in the two-hundred-seat parliament, which lasted sixteen hours. Meanwhile, hundreds of people protested. When Babis walked out on a given to talk to the demonstrators, he was pelted with water bottles.

Babis vowed to the parliamentarians that he is keeping the Czech Republic on a Western course. In the end, his government received the support of 105 of the 196 delegates present.